On Bataan, It Wasn't About Winning...

...It Was About Surviving 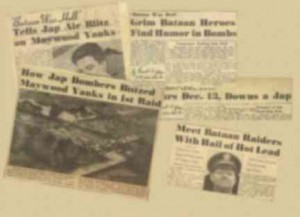 Bataan Was Hell — the name of a series of newspaper columns written by 1st Lt. Emmett F. Gibson that appeared in the Chicago Daily American in July 1942. Lt. Gibson had just been returned to the US after suffering near fatal injuries during the Battle of Bataan.

These stories were some of the first contemporaneous accounts of the fighting in the Pacific Ocean and appeared just after the surrender of Allied forces in the Philippines.

There are numerous inaccuracies, grammar errors and misspellings in these articles. There are also outright inaccurate boasts and racist comments throughout. I have left all of those errors, and comments in the columns as printed. I ask the reader to understand the context and time that these columns were written.

I see these columns through unobjective eyes since Lt. Gibson was my father. He died when I was just 3 years old, in 1958. I welcome your feedback.

192nd Tank Battalion - By The Numbers