In 1946, Emmett helped fight for a promised state bonus to be paid to WWII veterans. The bonus was not substantial — $10 per month to soldiers who were in the military but stayed in the states, $15 per month if the soldier fought overseas, and $900 to the beneficiaries of anyone killed in the war.

Although individually the amount was small, with nearly 1 million veterans in Illinois, the total bill was projected to come to $385 million. This was the largest spending bill in Illinois State history. With state budgets tight, a political wrestling match was fought over where the money would come from.

In the eyes of vets like my father, the battle was a political quagmire. The chief opponent in the state was Mayor Ed Kelly of Chicago, who would gain fame for reducing the debts of the City of Chicago by $100 million, but would also have scandals dog him until the end of his reign as mayor.

On October 4th, 1946, my father convened a meeting of the Veterans Bonus Non-partisan Committee, of which Emmett was the chairman, at the Bismarck Hotel in Chicago. Here is a document I found in my father’s papers that appears to be a press release for that event (my father’s first name was misspelled on the document):

“If the members of the armed forces of the State of Illinois are to receive the State bonus which will amount to $385,000,000, they will have to register before next Tuesday and then be sure to go to the polls on Tuesday m November 5th, and vote for this measure,” declared Captain Emmet Gibson of the 192nd Tank Battalion here this afternoon (Friday, October 4th).

Addressing more than one hundred members of his Veterans Bonus Non-partisan Committee in the Bismarck Hotel, Gibson a survivor of a tank battalion which was practically wiped out on Corregidor , said: “The Kelly City Hall machine is spreading all sorts of propaganda as to why people should vote against the bonus issue. The fact which bothers Kelly and his gang is the knowledge that this money will be paid out by Republican State administration which originated the bonus, and he is afraid that in gratitude for this well-earned bonus we veterans will vote against the Mayor.

“The veterans of Illinois are entitled to this bonus and come Hell or high water – Kelly machine notwithstanding – we are going to register and then vote for our bonus on Tuesday, November 5th, and to demonstrate our distaste for Mayor Kelly’s attitude, we are going to vote against every Democrat on the county slate. If Kelly wants to play politics on this issue, we will accept the challenge. If we could take the Japs with bullets, we certainly will have no trouble in taking Kelly and his pro-Communist crowd with ballots!”

Continuing, Gibson said: “We veterans have tracked down the falsehoods that the Kelly crowd is telling the voters. They are telling the taxpayers that their real estate taxes will be increased and all kinds of other lies. Kelly is a smart politician in the eyes of some people, but he wasn’t very smart to pick a political fight with the Veterans of World War II.

“We are appealing to veterans throughout the state to go out and register, and then be sure to vote for the bonus on Election Day. Because of unfair political trickery, we are asking every war veteran everywhere to vote and to ask for their friends to vote against Kelly and his machine in the coming election.”

Continuing Captain Gibson said: “If anyone else but Kelly opposed our bonus, it might be different, but here is a man who has been at the public trough all of his life. Kelly is part and parcel of the New Deal, which has wasted and squandered not only millions of taxpayers’ money but billions upon billions of it. After we sacrificed our homes, our lives and our loved ones, Kelly starts a whispering campaign to defeat our bonus measure.

…here is a man who has been at the public trough all of his life. Kelly is part and parcel of the New Deal, which has wasted and squandered not only millions of taxpayers’ money but billions upon billions of it

“If this issue is to be put on a political basis – and can take it either way – let us give credit where credit is due. Governor  Dwight H. Green, a veteran of World War I, is the man who instituted legislation for a bonus for us, and it galled Kelly and his New Deal Communistic crowd to see anybody spend millions of dollars other than himself and his disintegrating New Deal in Washington. Kelly has asked for it boys. Let’s give it to him on Tuesday, November 5th, and give it to him good!”

The measure was on the November 5th, 1946 ballot. It passed overwhelmingly. Republicans also made tremendous inroads into Cook County offices during the same election. Kelly left office in the next election in 1948. 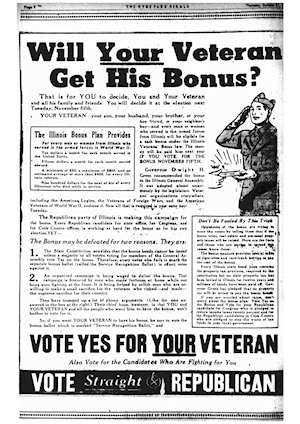