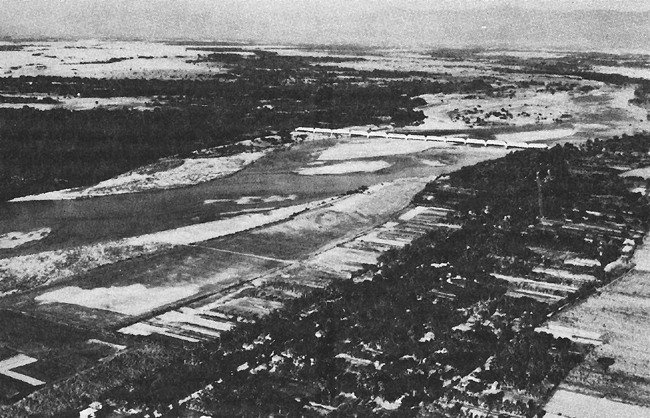 Lieut. Emmett F. Gibson and the men of the old Maywood Tank Company landed in the Philippines on Thanksgiving Day, 1941 and within a few days were plunged into the inferno of war. They were bombed at Fort Stotsenburg, saw the aircraft at Clark Field virtually destroyed, were hurled head-on against Jap shock troops. Thousands of Japs dropping on Luzon by parachute were slain by the gallant Filipinos. A Maywood officer, single-handed, stopped a Jap force trying to cross a river. The Maywood Tank Corps fought day and night without rest to rescue trapped Filipino forces holding back the invaders even when their lines of retreat were cut. With two old planes the American forces put a Jap armada to rout, meanwhile watching the wanton slaughter of Manila. Gibson, wounded, was placed on a hospital ship, bound for Australia:

We were lying — we wounded and injured men — on cots on the deck of the hospital ship, staring up at tropical starts so bright and close that it almost seemed we could reach up and touch them.

The ship was rising and falling to the swell of the China Sea. Behind us lay the bleak, silent bulk of Corregidor, sleeping in a strange counterfeit of peace. And beyond Corregidor we could still see the glow in the sky where the army was blasting stores of oil and gasoline.

It was long past midnight, but we could not sleep. There were too many memories for that; too much anxiety for the immediate future. Night cloaked us now — but what would come with the morning, when our white ship was a brilliant dot on the blue sea?

Japan owned this sea. We were at her mercy — and she had shown over and over again that her mercy was small enough.

I suppose that at times, I was only partly conscious. Reality and dreams became all mixed up, somehow, as the past month ran through my mind…

Thinks How Pals Will Fight It Out

The Filipinos like the green, young coconut — with its meat softer, and soapy-like. When it ripens on the tree, the coconut gets a sort of seed of solid coconut meat. The only part of the ripe coconut that the native will eat. Filipino kids use it for candy…

You open a coconut with a bolo, that wicked native knife. Slash off the top and bottom, breaking off strips of husk as you work along the side, exposing the hard shell. Break the shell with the handle of the knife.

A breeze swept over the deck. Soft as the tropics, soft as the eyes of a Filipino girl.

Pretty they were, those Filipino girls — pretty, and slender and brown, with supple strides and poise. They learned their walk and their carriage through carrying things on their heads.

I’ve seen a dainty girl lift a five-gallon gasoline can of water to her head, balance it there, and walk off with it effortlessly, her body flowing in liquid motion.

There was a lightness in the east. Dawn was coming nervously over the horizon — dawn and whatever the Japs might send us.

It was light now — broad daylight. A harmonica started up. That would be Lieut. William Slicer of 1845 S. Fifteenth av., Maywood. Slicer was with us on the hospital ship. He had broken his leg on December 13, when he rode his motorcycle into a parked truck in a blackout.

I had the fantastic idea the Japs could hear that harmonica, and know where we were. I tried to shout:

“Shut up! For God’s sake, cut it out, before THEY hear you!”

I was picturing an ocean full of submarines, their commanders listening to Slicer’s harmonica, following its sound, torpedoing us. Slicer didn’t stop. He had learned how to play the harmonica, after a fashion, in the hospital.

He had no favorite songs. He murdered them all — and almost drove us crazy with his monotonous mouthings on the instrument.

Three days passed. We were at Macassar, where later a great battle was to be fought against a Japanese fleet of warships and transports.

We stayed there for four languorous days — and then steamed into the bright Coral Sea, where months later, the Japs were to feel the strength of America’s naval might, where the onrushing Japs were to meet their first defeat.

Ten days we steamed through that sea; and on the seventeenth reached Darwin, in extreme northern Australia. I was still flat on my back, but Slicer was able to get up now and then and hobble about on crutches.

Our little ship left Darwin on January 18th. It was comfortable, cursing through the warm seas. Minutes stretched into hours; hours into days, until we lost all track of time.

Slicer and his harmonica was the cross we had to bear. His technique showed no improvement as the days wore on — seemed to get worse, in fact. We joked about throwing him overboard — and there was more than one attempt to steal the harmonica.

But he guarded it with his life…

And then an alarm came.

A cold chill made me shiver.

We shouted for nurses, to learn what was the matter. Subs? Bombers?

They told us. It was bad enough. The ship was on fire.