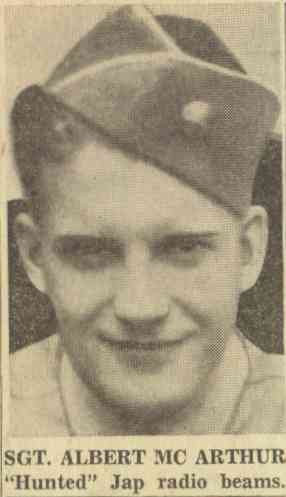 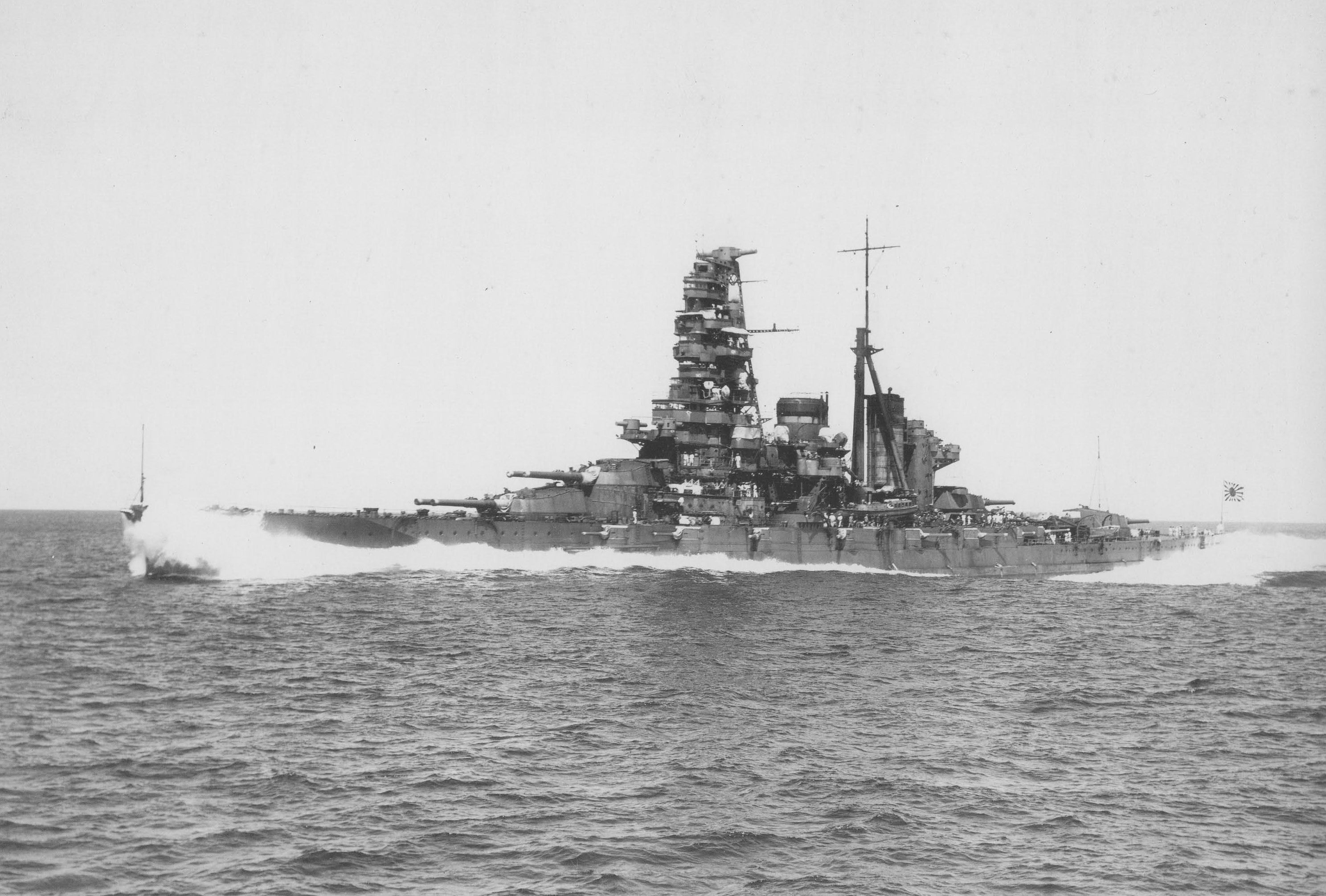 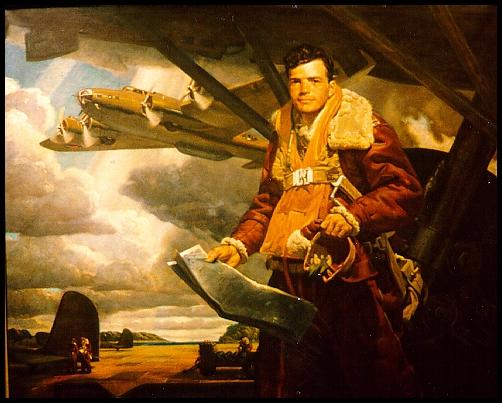 Lieut. Emmett F. Gibson and the men of the old Maywood Tank Company landed in the Philippines on Thanksgiving Day, 1941 and within a few days were plunged into the inferno of war. They were bombed at Fort Stotsenburg, saw the aircraft at Clark Field virtually destroyed, were hurled head-on against Jap shock troops, but they learned to jest at bombers. Henry Deckert, tank gunner, was killed wiping out a Jap nest.

Our personal part of the war kept us too busy in the early days to think much about the broad sweep of the Japanese onslaught on the Philippines.

The first few days were a welter of confused reports, fantastic and funny at times, to which the Japanese radio contributed. The Nipponese were trying to jam our communication wavelengths and were spreading rumors, some impossible and some insidiously close to the truth, in an effort to shatter our morale.

Thankful to Japs for Providing Joke

We learned on the first day of the war to pay no attention to rumors. We were at dinner. Smoke and dust were drifting from bombed Clark Field. We were sobered by our first experience with the blitz — when a voice in cultured, stilted English came out of the loud speaker of the radio:

“The entire 192nd Tank Battalion has been captured by Japanese occupation forces!”

The 192nd? That was us! That was Maywood’s men, safe at Fort Stotsenburg. We were rather thankful to that Jap propagandist. He gave us our first joke at a time when we needed it!

For days that broadcast was a byword. If a chap started grumbling, as soldiers will, we’d turn away from him and say:

“I hope, sir, that the folks at home didn’t hear that. It would only make them worry.”

It taught us a lesson. Button up your ears, forget about rumors and do your job. Let the generals do the worrying — that’s what they get paid for.

So we set Sergt. Albert C. McArthur, 310 S. Villa Park, a radio “ham” in civilian life, to work on the radio direction finder, trying to locate intruding Philippine-based Jap radios, went on fighting a war. McArthur is the son of Albert C. McArthur Sr., clerk of York Township and the chairman of the board of directors of the American Bataan Clan, organization of relatives of the boys who fought in the Philippines.

Piecing the war together there behind the Agno River just before Christmas, things shaped up like this:

Manila and Nichols field and other military camps and posts throughout the island caught hell, as well as Clark Field, on that first day. A fleet of Jap warplanes bombed Manila in the clear moonlight, leaving a trail of destruction.

Army men said the Jap fliers were aided by light signals from the ground and the work of rounding up fifth columnists was pressed. Fires were started in Cavite Naval Base; a pillar of Smoke rose from Nichols Field, and civilians began evacuating Manila.

It was hell, indeed, in that city. There were no public air raid shelters; and men, women and children were streaming out of the city — on foot, in dilapidated autos, in every form of native conveyance. They made a weird column, stumbling away under the canopy of Smoke from raging fires that had been their homes; while overhead interceptor planes rose to fight overwhelming numbers of the enemy.

In the seas surrounding Luzon, Jap troopships were gathering like a wolf pack for the kill. On the tenth, Jap parachute troops were reported at Vigan, port on the northwest coast of Luzon, 100 miles north of Agoo. On the same day sea-borne Jap troops landed at Aparri, port On the north coast of Luzon.

Fragmentary reports of the fighting trickled in to us — of Filipino troops fighting like demons in those far ports; of desperate clashes, of Japanese parachutists hunted like dogs through forests and mountains.

There was the story of the remnants of a Jap landing force, driven by desperate fear, taking refuge in the trees; and of the Filipinos hunting them down one by one — shooting them from the trees as hunters might track and shoot down ‘possums in America or natives might kill monkeys through the leaves. They must have looked remarkably like monkeys, too, those, squat, dark little men from Japan.

But the Japs appeared to be holding on to Aparri, and to Vigan, too; and they were driving hard to extend their beachheads there. It was bad country south of Aparri — the mountains of Northern Luzon, where half-savage tribesmen supplemented the Philippine constabulary, fighting with arrows, with spears, and evil-looking bolo knives.

Natives like “General Thomas,” ruler of the diminutive Balugas, who approached a group of American officers with a sling of poison arrows around his shoulders, an ancient cartridge belt at his waist, and a gleaming bolo in his hand.

He wore an old U.S. Army shirt, and a fatigue cap. He drew himself up to his full four feet of height, and with dignity told the officers a story, the essence of which was:

“The Balugas, with the approval of their tribal councilor, my father, King Alfonso, proclaim themselves the allies of America in the fight against the common enemy.”

They were bitter, hardy fighters — and the mountains and forests of Luzon, the wild country off the beaten track — was their natural battle ground. Scores of Jap soldiers dropped to them in the melee of fighting in the North; and the Japs learned to avoid their mountain fastnesses, where many tribesmen are still fighting as free men in a punishing guerilla warfare.

On the 11th we had electrifying news. The Jap battleship Haruna had been sunk — news modified only by the sadness we felt when we learned Colin Kelly had given his life in the attack.

On that day, too, as we learned later, a light landing force had felt out Lingayen Gulf, and had been driven back by Philippine troops.

By the 12th, the Japanese assault had developed into a four-pronged offensive, with beachheads at Aparri, Vigan, Legaspi on the extreme southern tip of Luzon, and near Batangas, not far from Manila. The web was closing in.

Filipinos Wipe Out Invaders From Skies

There was word of a strange, tangled battle in the mountains at Ilagan, in north central Luzon, 80 miles south of Aparri.

Jap parachutists had landed there, and had been engaged by the Philippine Constabulary. Francisco Villanueva, civilian communications technician, reported:

“Hundreds of parachutists and other troops were wiped out in the mountains. Many of the parachute troops were slain as they dangled from their ‘chutes in midair. The Filipinos fought vigorously, bravely and well.”

What an understatement that was — to describe the headlong fury of the Filipinos, who hurled themselves on the enemy wherever they found him, careless of death, utterly without fear!

There were reports that enemy troops, moving overland from some unknown source, had taken a hand in the battle of Ilagan — possibly a column pressing down from Aparri. And there, again, strange, silent death came to Japanese soldiers, ambushed and slain by tribesmen in the mountain passes and dark ravines.

But valor was not enough; native skill was not enough, to stem the crushing tide of Jap numbers. The Japanese seemed to be making progress from the beachheads when, on the 13th, the second enemy effort to land on Lingayen Gulf was reported.

Again the Philippine forces repulsed the invader, and the official communiqué declared that:

“Mopping up in the Lingayen has been concluded.”

By the 16th, the fifth column in Manila had been smashed, with the confession of Ramon Mantille, leader of the anti-American Ganap organization, that Ganap had plotted to aid the Japs.

And then the deluge came!

The “Sons of Heaven” sent eighty troop ships into Lingayen Gulf, began landing a force estimated to total 80,000 or 100,000 men!

The Filipinos fought as hard as they always did. But Japanese artillery and tanks won a foothold at Agoo. Maywood’s men were called on, as we have seen. Lieut. Morin rolled gallantly out of Fort Stotsenburg to meet the full power of Japan’s invasion force head-on.

The Japanese were rolling south — little more than 100 miles from Manila. We gave ground — grudgingly and slowly. Sheer power of numbers shoved us back to Rosario — back to the line of the Agno River, near Villasis, thirty miles south of Agoo.