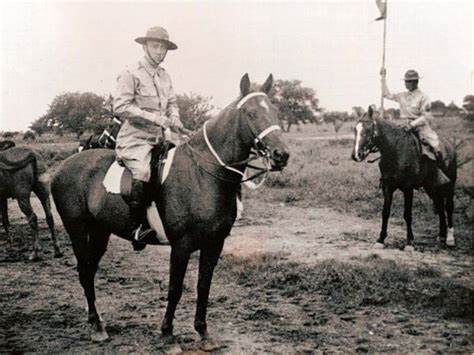 Lieut. Emmett F. Gibson and the men of the old Maywood Tank Company landed in the Philippines on Thanksgiving Day, 1941, and within a few days were plunged into the inferno of war. They were bombed at Fort Stotsenburg, saw the aircraft at nearby Clark Field virtually destroyed, and were hurled head-on against the Japanese shock troops invading Luzon Island. Now go on with the story:
We stopped keeping a timetable of enemy bombings after the 13th of December, when we had our triple dose of attacks from the air.

Enemy bombers and bombs became as much a part of the daily life of Maywood’s men as dodging traffic had been back home. We never really grew to like them, of course. But, unless we were right underneath, we didn’t pay much attention to them.

The first time you’re bombed, you have a panicky moment. Your first impulse is to run — to get away — to run like hell without reason, without any purpose in mind; to dash in any direction. Then, in a moment, you overcome that panic. You seek cover — a ditch, a trench, a foxhole, anything that’s handy.

Next You think of fighting back, with machine guns — any weapon available. And finally You reach the stage we reached after the 13th. You stand and watch ’em if the bombers aren’t directly overhead. There’s a thrill to watching a bombing.

On a clear day You can see the bombs dropping through the sky for a long time before they hit. When they strike and explode, there’s a mushroom of dirt and smoke. They don’t make a “boom” or a crash when they go off — but more of a “who-o-ompf.” It’s a combination of the noise of the bomb going into the ground and exploding at the same time. And the ground jumps under You with the same concussion.

We learned that we weren’t going to be killed every time a bomber came over. We learned that it IS possible to live in hell — and even to joke about it.

There was humor in the thing, in a grim sort of way.

The kind of humor that Capt. Don Hanes and his company found when I saw them, days later, in the heat of blood and sweat and glory that marked their slow, fighting retreat down the valley of Luzon toward the Bataan peninsula.

They had been fighting all day in searing heat that reached 100 in the shade, and that must have come close to 120 in the broiling interior of the tanks, whose sides were too hot to touch.

Ready for ‘Beef’ That Doesn’t Come

They were on the ragged edge of complete exhaustion when I reached their camp one night with orders for Hanes to rouse his men and move them out again. Their nerves were hopping like Mexican jumping beans; their faces were gaunt and drawn, their eyes sunk deep in baggy circles.

But they grinned after I had awakened them, and someone said:

“Gibby! What’s wrong? Are we orphans? Don’t we rate any more.”

I was ready for any beef. These boys had earned the right to speak their minds, and I pulled out a cigarette, squatted on the ground and told them to start talking. Hanes said:

“This is a hell of a way to treat a good company. We’ve been fighting all day. We’ve covered ten miles of ground. And what sort of an escort do the Japs give us? One bomber. One single, lousy bomber. That’s all we see all day.”

He paused, and then continued:

“You know, Gibby, we rate three level Jap bombers and five dive bombers. That’s what we’ve been getting, and we’re used to it. Sending one bomber is an insult, and we’ll make Hirohito answer for it some day!”

Don Hanes! He and his gallant men may be in the hands of the Japs now — those of them that are a live. But you can’t crush spirit like theirs. They’ll stick it out, wherever they are.

Don used to work for Electro-Motive Corporation in LaGrange. His wife, Gertrude, and their son, Charles, 14, are waiting for him in their home at 1803 S. Fifth av., Maywood.

And so the last bombings I can recall as isolated, separate incidents of the war were those at Stotsenberg on the 13th. After that, bombs were fused into a never-ending background for hell.

There were more serious matters to consider. There were reports the Japs had landed in Lingayen Gulf!

Philippine Scouts had met them — those gallant, able native soldiers trained and officered by American officers. Those of us who have been in the Philippines can never say too much for them — for their courage, their determination, their sheer fighting ability.

The Twenty-sixth Philippine Cavalry — native outfit which Lieut. Gen. Jonathan N. Wainwright had once commanded — was heavily engaged that first day. The Filipinos wiped out the initial landing party with rifle fire, closed with that was left and polished it off with bayonets.

But the Japs kept coming, and sheer weight was wearing down the resistance of the Filipinos — weight and bombs.

It wasn’t so much the destruction of the bombs, it seemed, as their effect on horses. Bombs drove the horses wild. They became unmanageable, plunging in frantic circles, galloping in terror into the teeth of the Jap fire, or tossing their riders at critical points in the battle.

At that precise minute, reports coming back to us indicated, the Japs had not yet landed tanks. But the Twenty-sixth Cavalry was in a serious predicament at Agoo, the landing point on the shore of the Langayen Gulf, and a platoon of B company was ordered up to relieve them.

The tanks rumbled north from Stotsenburg, as I recall, on the 19th — though dates have a way of becoming confused as I try to review those days. They were bound for the first engagement between American and Jap forces in the Pacific was — and a brave, fine sight they were as they roared away, past the blackened ruins of Clark field.

They met the Japs at Agoo. Met an inferno of fire from naval ships in the gulf; from artillery, antitank guns, bombs and from tanks which, they found, the Japs had landed.

These sons of Maywood smashed into the very heart of a blitzkrieg in their first fight; crashed head-on against the pick of Japan’s shock landing troops. And in that one fight they attained the stature of heroes.

Lieut. Ben Morin, 1629 S. Seventeenth av., Maywood, was leading a column of five tanks when they encountered the Japs His was the first tank into the battle. He rolled down a road, Japs pouring fire into him from the ditches.

A heavy Jap tank pulled across the road, blocking his path. A withering fire came from it — in crackling flames and smoke that beat an infernal tattoo on the steel of Morin’s tank.

There was nothing in the experience of Morin and his crew to prepare them for such a bath of death as this. But they didn’t falter — and advance they tried. Morin swung his tank off the road. He was trying to pass the bigger enemy.