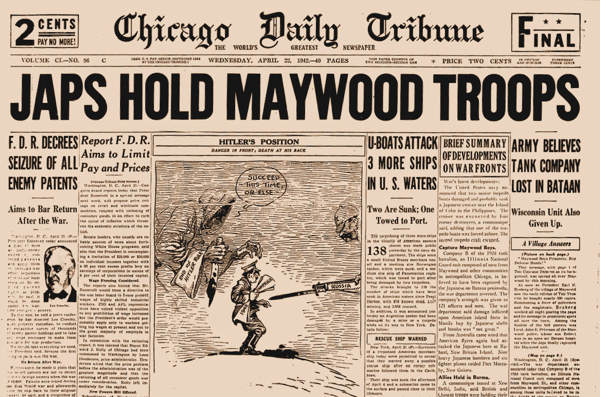 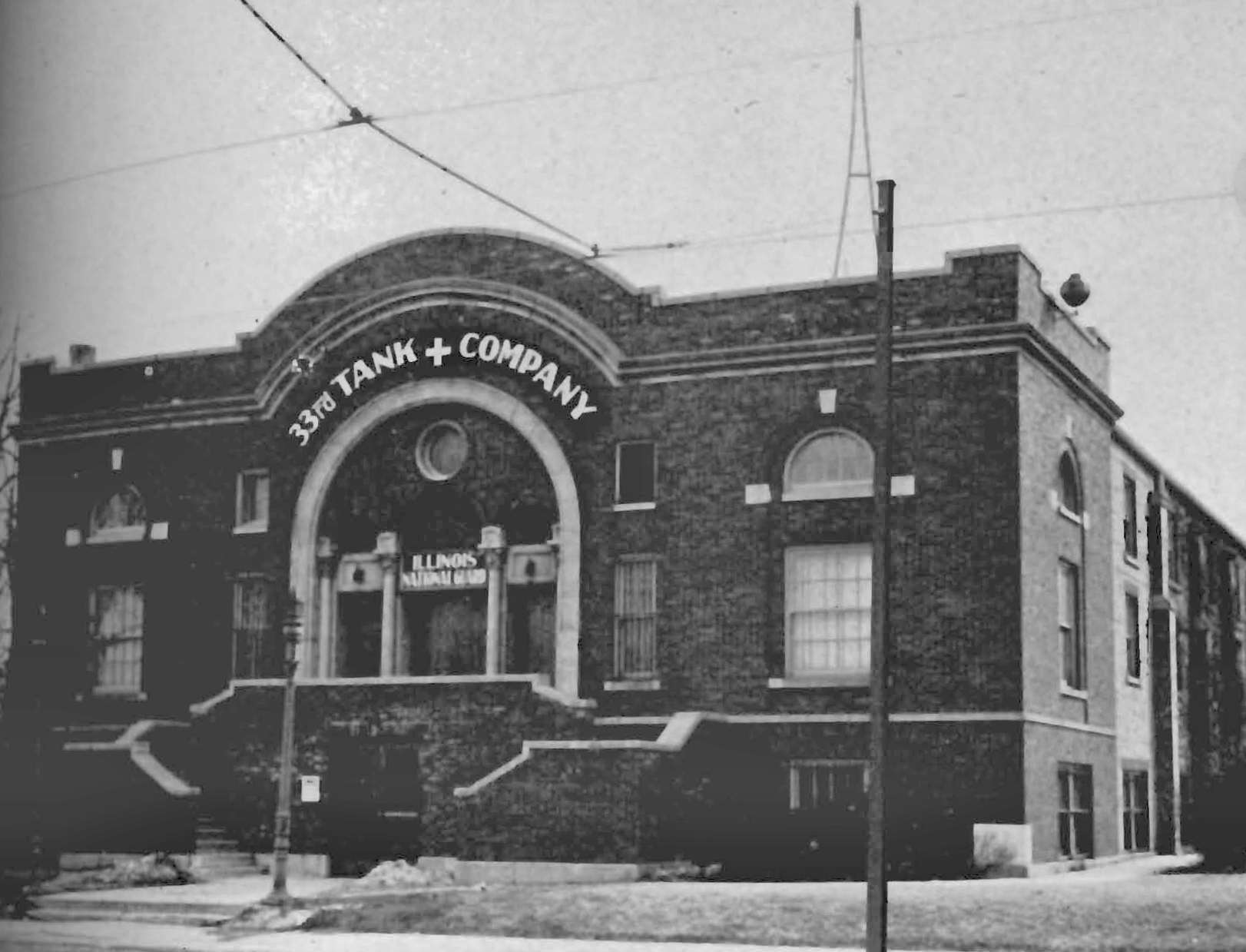 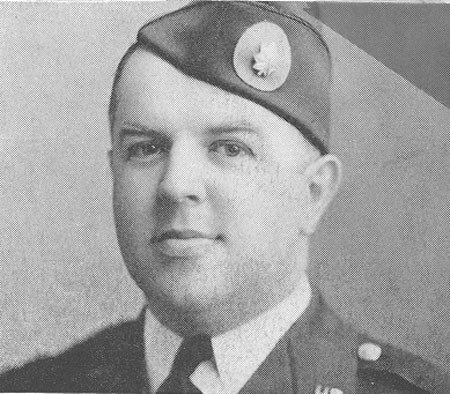 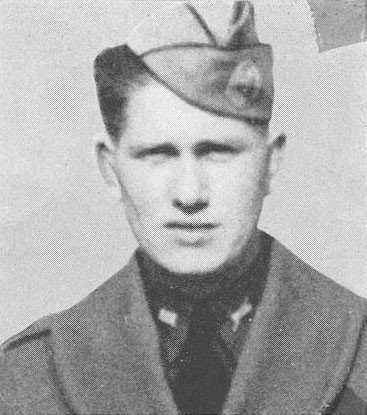 Lieut. Emmett F. Gibson and the men of the old Maywood Tank Company landed in the Philippines on Thanksgiving Day, 1941 and within a few days were plunged into the inferno of war. They were bombed at Fort Stotsenburg, saw the aircraft at Clark Field virtually destroyed, were hurled head-on against Jap shock troops. Thousands of Japs dropping on Luzon by parachute were slain by the gallant Filipinos. A Maywood officer, single-handed, stopped a Jap force trying to cross a river. A Filipino mayor killed the entire crew of a Jap tank. Now go on with the story:

The long fingers of the morning sun were reaching over the twin peaks of Mt. Arayet, dipping into the tropical valley of central Luzon.

From a native barrio came the crow of a cock and the harsh discordant cries of a flame-colored parrot. Somewhere a sleeping water buffalo snorted into wakefulness, and a morning breeze rippled the rice paddies and stirred the rustling palm fronds.

And from the tens of the old Maywood Tank Company at Fort Stotsenburg, still wrapped in the soft shadows of dawn, there came the bustle, the muffled voices and clanking equipment of soldiers awakening to the last hours of peace that many of them would ever know.

For this was the morning of December 8 there in the Philippines. Far back across the Pacific, east towards the rising sun on the other side of the international dateline, it was noon on December 7, and Pearl Harbor lay in flames and smoke behind the last of Japan’s treacherous raiding bombers.

And Maywood’s sons, stirring now in wakefulness, drawing the soft, fragrant tropical air of the Philippines into their lungs, were to plunge that day into a red, blazing, blasting, screaming inferno.

Heroes All — Laughed in Face of Death

From that day forth, their life was to be a hell of shells, bombs and bullets, of stifling tropical heat, searing thirst and hunger that would only end in the death or in their capture by the Japs on April 9 — an eternity later — on Bataan.

For four months those men — lads from quiet, comfortable homes, from the ordinary walks of life — were to live and fight as only heroes can. They drove their tanks into Hades and out again with a grin. They battled everything the warlords of Japan could hurl against them — and laughed!

They hurled their tanks against enemy tanks; they defied the crushing weight of Jap artillery; they jeered at bombs raining from Jap planes, and when their tanks were surrounded by overwhelming Jap forces, they destroyed them and fought their way out by hand!

They struggled through tropical swamps, through the mire of rice fields, and the choking tropical vegetation. They fought in fox holes on Bataan, where it was steel against steel, man against man — winner take all in the battle for life and death. Crushing pythons, poisonous cobras and rice snakes were their enemies, as well as the Japs. Mosquitoes “as big as dive bombers” were a constant annoyance.

Somewhere they live today — Jap prison camps, or in Valhalla, for not even death can destroy such men.

By the grace of God, I was spared death or capture. I was luckier, by far, than they. I was injured early in the fight, invalided to Australia, whence on May 22 I reached the United States.

Arrived at Manila on Thanksgiving Day

I was born in Melrose Park twenty-five years ago, and graduated from Maywood grammar school and Proviso High school. In November 1933, I enlisted in the old Maywood Tank Company; but I resigned in 1935, when I went to Washington, to work as a messenger boy in the patent office.

In 1937 I was transferred to the income tax unit, and in June, 1938, I came back to Chicago as a clerk in the alcohol tax unit — and rejoined the tank company.

I was commissioned a second lieutenant, November 23, 1940, and two days later the tank company was mustered into the federal service. We were at Fort Knox, Ky., for nine months — I received my first lieutenant there, April 2, 1941 — and in September went into maneuvers in Louisiana.

The old Maywood Tank Company had been formed into the 192d Tank Battalion, with the addition of men from Kentucky, Ohio and Wisconsin — and some Maywood men went into the 194th. We drew new combat equipment from October 1 to 20, and on October 27, we moved out for the Pacific.

It was Thanksgiving Day when we steamed past Corregidor Island into Manila Bay, past the great naval base at Cavite, and docked at the strange, romantic port of Manila. Almost immediately we were moved to Fort Stotsenburg, in a broad valley sixty miles north of Manila, where, pending construction of barracks, we went into tents.

Maj. Theodore F. Wickord, the hearty, jovial, able employee of the Public Service Company of Northern Illinois, in Maywood, was our commander — a man who never drank or smoked, who insisted all his officers and men be alert, able and well drilled, yet who was easy to talk to.

He had risen from the ranks of the old tank company; he knew a soldier and a soldier’s job from the ground up. He could command instant discipline — yet he always had a joke to tell; an ideal commander to lead men into the very flames of hell.

There were such men as Second Lieut. Arthur A. Holland, who had been in the hardware business with his father in Forest Park, who handled all trucks and transportation and in his quiet way, studied hard to master his job, and Lieut. William H. Slicer, 1845 S. Fiftieth court, Cicero, who at 24, was younger than most of us and who was injured and evacuated to Australia with me.

Other officers included Capt. Donald Hanes, who used to work for Electro-Motive Corp. in La Grange, and who, as I shall relate, almost shot me on one occasion; Second Lieut. Matthew S. MacDowell, another graduate of Proviso High, a brilliant intelligence officer, nervous, quick and keen; Second Lieut. Ben Morin 1629 S. Seventeenth av., Maywood, soft-spoken combat commander, who was missing in the first tank action against the Japs.

But merely to tabulate the name of those heroic men would take more space than is available. A gallant group they were and I am proud to have been their comrade for a time.