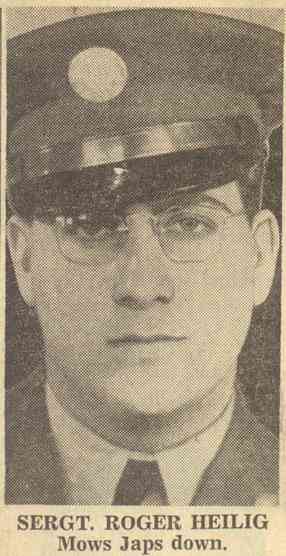 Lieut. Emmett F. Gibson and the men of the old Maywood Tank Company landed in the Philippines on Thanksgiving Day, 1941 and within a few days were plunged into the inferno of war. They were bombed at Fort Stotsenburg, saw the aircraft at Clark Field virtually destroyed, and were hurled head-on against Jap shock troops, but they learned to jest at bombers. Henry Deckert, tank gunner, was killed wiping out a Jap nest. Thousands of Japs dropping on Luzon by parachute were slain by the gallant Filipinos. Now go on with the story.

Surrounded by Foe, Fights Way Back to Own Lines

The battle of the Agno River was a wild melee of tanks and men, of blood and sweat and gallant courage.

There was no peace that Christmas time in the Philippines, for the men in the front line. They fought, to borrow a flier’s term, “by the seat of their pants” — fought by instinct, in a clawing, killing scramble that defied all the rules.

Heroes were made by the score. The true metal of men was proved; and many were the men who, overlooked before, proved themselves there. Boys from city streets, from jobs in quiet offices and stores, grew suddenly to the stature of fighters. They found new resources within themselves there in the tropical jungle.

The story of the Agno River must be told in broken bits — in the stories of the few of the many who rose to great heights there. Perhaps the general staff can tell the fight as an entity. It is beyond the knowledge of a tank lieutenant to do so.

The story of Lieut. Jack Altman is a case in point. We picked him up while we were on maneuvers in Louisiana. Originally from Harrodsburg, Ky., he was commanding C company of our sister group, the 194th tank battalion above the Agno. He was a slow, quiet chap, and a lot of us underestimated him — mistook his drawling, lazy strength for dull-wittedness.

Altman had been fighting somewhere above the Agno on the 24th. Christmas Eve found him moving southward through rough country. He was out of contact with headquarters; retiring warily through a country filled with enemy patrols.

Toward evening, he realized that he was cut off. Jap forces had outflanked him, and passed him. He told me later:

“I found I couldn’t get through on the road. The Japs had mined it — and they were too strong for me to smash through.”

Altman sat down a minute to reason things out. If he couldn’t go ahead, if the road was denied to him, he’d try to go around.

It was strange, rugged country, but Altman and his tanks — some seventeen in all — rolled through it. They were going at large into Luzon, and maps didn’t do much good in the darkness. They had several brushes with Jap patrols, and they had to ford bridgeless streams.

God alone knows how they did it — but they smashed their way through for seven miles, until they came on a stream too large for the tanks to ford. Japs were all around, and it must have looked like the end.

But Altman and his boys didn’t figure things that way. They had a council of war, and Altman said later:

“I asked them what they wanted to do. I was worrying about the tanks, and I said it would be a damned shame to let the Japs get them. The boys thought so, too. So we burned them!”

they couldn’t tell when a Jap patrol would swoop down on them; and they knew the flames from the burning tanks would attract every son of Nippon within miles. But they stayed until the fires had burned out — and then they completed the wreckage, smashing what was left of the motors and guns with crowbars and wrenches.

“Then we started thinking about how to get back,” Altman related.

And that was something to think about, too. It was night, in an unknown wilderness. There were snakes, and rocks; precipices and choking vegetation to worry about. There was a Jap army between them and home. Steaming heat soon made every step an effort; exhaustion and hunger walked with them.

Their clothes were sodden and torn from the streams and swamps, from the ripping fingers of thorns and twigs. At times they had to cut their way through dense tropic vegetation in the dark — and, again, they would lie breathless within hearing of a Jap force, or would fight it out with patrols that sighted them.

They were a gaunt, hollow-eyed crew when they stumbled back to our lines.

But not a man had been lost! Eighty men started that epic struggle, and eighty men were still on their feet when they reached safety.

There’s the story of Sergt. Roger J. Heilig, 2116 S. Eighteenth av., Maywood, who was standing on a dike along the south bank of the Agno River on Christmas Eve, near Villasis.

His tanks were behind him, covering the line of the river. In the dusk he saw a group of men coming across the river, and he idly dismissed them from his mind with the thought they were Filipinos.

He strolled back toward the tanks. Suddenly he stopped. As he explained later:

“I realized there were NO Filipinos across the river! They had all crossed to the south bank!”

Those shadowy figures were Japs!

Heilig dashed to a tank, grabbed a Thompson submachine gun. He raced back to the dike, threw himself on the ground, and opened fire.

Japanese from the other bank opened fire on him with their mortars, but Heilig held his post. He must have wiped out thirty of the enemy soldiers as they waded across the stream. He and his Tommy gun stayed there until additional forces came up; and the Japs made no crossing there.

The story of Heilig’s stand ranks with the great exploits of all time. Few men in history have held a ford, as he did, in the face of an invading army!

Back home, folks were gathering about their Christmas trees, singing age-old carols of peace and cheer. Heilig went back to his tank, stretched out on its steel flank for a few hours’ fitful sleep.